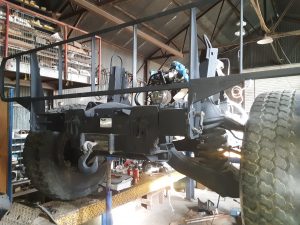 There’s nothing here of any note, its just an updated picture of the chassis with the first generation brush guard installed. We expect to finish up the chassis and re-join the body and the chassis mid-December and return the truck back into Shop 1. 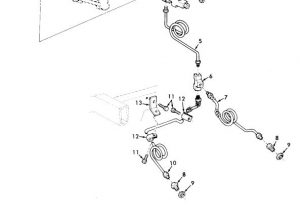 From the parts manual, it appears Item 10 goes in front of the crossmember.  However, after researching brake lines on the 998, we learned the tubing starts on the rear side of the crossmember and loops through to the front side as indicated in the following picture. 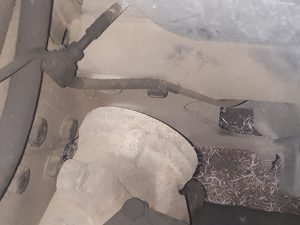 Below is the front RH brake line mounted in the M1038.

The lesson is exploded views in the parts manual are not always accurate. A big example of these inaccuracies is the rear vent lines (Fig. 149), which appear to have been flipped left to right. We will address these discrepancies in another article. 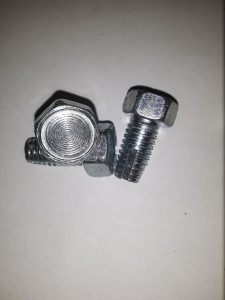 This bolt is called out a number of times in the parts book, and in at least one place it is referred to as: SCREW, TAPPING 3/8-16 X .62. It is primarily used to hold down brake line and vent line loop clamps, and is even used on each hub to attach the vent line loop clamp to the hub. 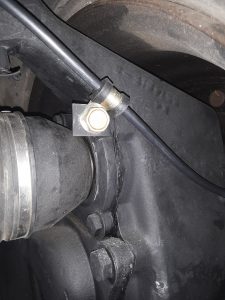 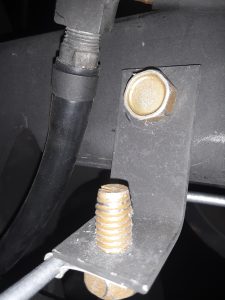 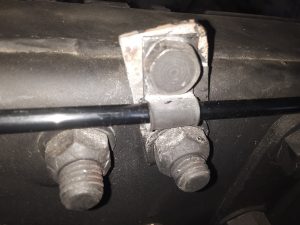 There really isn’t an easy substitute that looks or works correctly on this.  We found at least once on the 1038 where a mechanic (or other person) tried threading a 3/8-16 bolt into the frame to hold a cushion clamp on, but it simply would not tighten.

We have ordered these screws from some of the “big 3,” and they worked, although they seemed to be a bit longer than the call  out. And after we acquired a bag of 100 of the proper screw (with the proper NSN), it was noted that the ones ordered from one of the “big 3” were slightly longer. 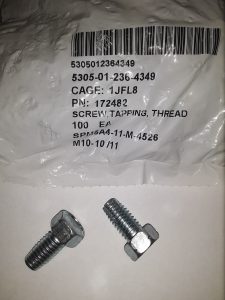 The 6.2 and 6.5 commonly will leak from the injector fuel return line hoses.  (Fig. 11, Item 23). There is no NSN assigned to these hoses, rather they are cut to length from hose p/n 9439046. As these hoses age and dry out, they tend to crack and break, resulting in fuel leaks on the engine and onto the exhaust manifolds. 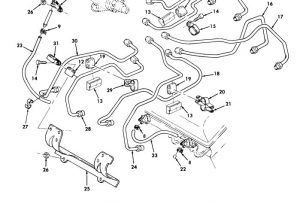 Badger markets a complete kit to replace the return hoses as Badger Diesel 6265RLK. According to Badger, “This kit includes more than enough line to do the full job with 8″ of line per injector rather than the 3″ that the competition offers having only enough to barely do half the job. Thats 266% more line!” Badger further points out this hose is made in Germany, not China as is apparently their competitor’s hose.

In our opinion, this hose is a definite upgrade from the factory hose, and not having to use the extremely small and difficult-to-use hose clamps is a plus.

A common problem with standard hose clamps is that they will often tighten up unevenly, cock sideways, and require excessive torque to seal.  Here, we have replaced the hose clamps on the transfer case cooling lines with fuel injection clamps (14-16mm range). While these generally cost considerably more than a standard hose clamp, they offer improved sealing and reliability. They can be bulk sourced at a number of online sites, often at a greatly reduced price.

The picture aboves shows where we replaced the original hose clamps 4730-01-118-8278 [4730011188278] with 14-16mm (9/16″-5/8″) fuel injection clamps.  The original clamps were apparently installed at the factory from the top side of the frame prior to installing the body. We re-oriented the clamps so that they would be easier to adjust or remove & reinstall from under the vehicle.

These are still the original hoses that came with the powertrain. Although we had new hose to replace it with, we did remove and inspect the hoses. The hose itself remains “live” and showed no sign of cracking, so we retained the original hoses and installed the new clamps.

We are re-applying the rubberized undercoating to the M1038, because we plan to run it in the desert, and there is usually more salt in the desert than you might think. Since the body is off anyway, we are re-applying rubberized undercoating to the entire underside. CARC 686 substitute is being applied to all exterior surfaces. 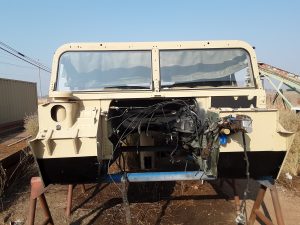 Note: we applied Rapco CARC substitute 686 Tan (FS 33446) to the firewall and front areas. The remainder of the vehicle remains the 3 color camouflage at this time. As a further note, we applied Behr paint in 33446 to the container on the left side of the picture. The colors are a perfect match with each other. (Pictures were taken at different times and different light, but they are identical colors) 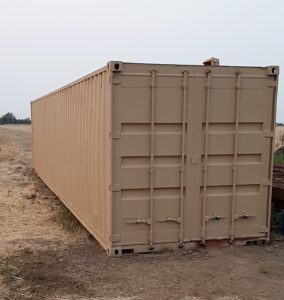 Both the fan control solenoid and mounting clamps had already been scavenged from the 1038.

After researching the NSN and manufacturer number of C32P, we identified this clamp as a 40-64mm or (1 9/16″ to 2 1/2″) stainless gear clamp. This clamp is an SAE 32 hose clamp. We acquired a box of ten Breeze brand clamps for our application, although only one is required. In fact, it appeared during our research that Breeze or its parent company may have actually been suppliers of this clamp to the government as 4730-00-204-3491.