This article is about whether the length is that critical.  We do not believe so. (but read “word of caution” at end of article) For restorative purposes you may want the length to be as close as possible, or if not, to otherwise serve as a useful upgrade.

The picture below shows the clearance against the steering box when using the 4″ long bolt: 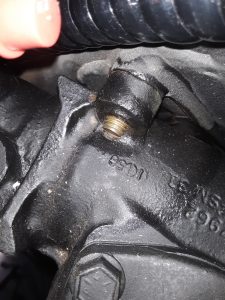 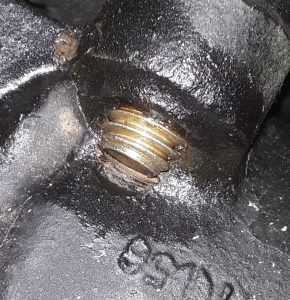 Note there isn’t a tremendous amount of clearance between the end of the bolt and the housing itself.  You can see that it was threaded into the housing so the bolt didn’t bottom out.

Ensure that whatever bolt/washer combination you use in the 4″ location that the bolt does not deadhead against the housing. (this would likely result in the upper boss of the steering gear not being drawn tight into the frame as well as causing an erroneous reading with a torque wrench.)

What about substituting longer or shorter bolts?

For the 4″ length bolt, the next shorter standard length would be 3 1/2″, and although that would at least partially engage most of the threads in the boss, we would advise against it except under emergency circumstances since this boss is the only one of the top two that even gets a bolt.

Our opinion changes slightly on the two lower 5 1/4″ length bolts. 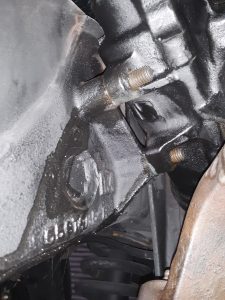 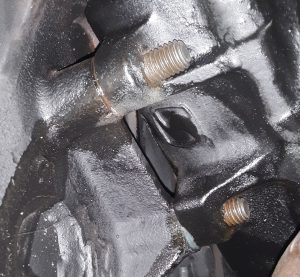 In the picture above, you can see how far the 5 1/4″ lower bolts extend past the bosses in the steering gear. There is no doubt that a 5 1/2″ bolt might work (assuming the threaded section of the bolt is long enough and doesn’t bottom out in the boss). 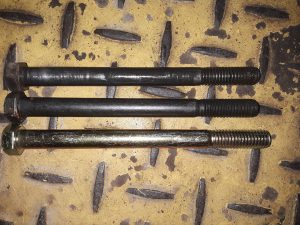 Pictured above are (top bolt), the sole 5 1/4″ bolt remaining in the M1038. The middle bolt is the GM 9430761 discussed above, and the bottom bolt is one supplied by one of the “big 3″ suppliers. The bottom bolt is in fact, a 5 1/2″ length bolt. Because we had concerns that the threads would not be long enough (and bottom out in the boss) we chose to not use the 5 1/2″ bolt and acquired the proper length of 5 1/4.” It is likely that people may have erroneously replaced this bolt with the incorrect length which could potentially lead to a dangerous situation.

In our opinion, the most rearward of the lower bolts could be a 5″ long bolt without any adverse issues. As we installed it, it is nearly 1/2″ past the boss. The frontward one could also likely get by with a 5″ length bolt and still thread completely into the boss.

A word of caution, however, is that the steering is one area you don’t really want to take risks in. You limit your liability and ensure vehicle safety by using the correct fasteners, or at least the correct length of fasteners called out by the manufacturer.